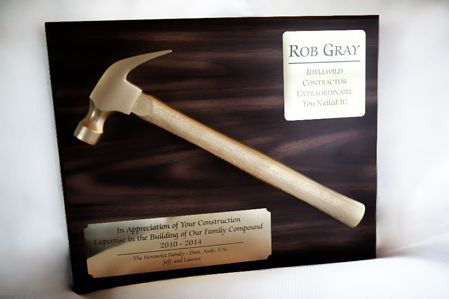 What a pleasure to write about our builder in Idyllwild, Rob Gray!

We originally went to Idyllwild to look for a small ‘get-away’ from Orange County. We looked at homes on lots that captured the small mountain town feel of the area, but there was nothing that truly excited us. On a whim, our realtor showed us a 12.5 acre piece of property on the edge of the National Forest which had been subdivided into seven lots; already in place was preliminary infrastructure—electrical meters, water meters, and paved driveways. But the previous owners found that funding for their project of seven vacation homes and later a proposed girl scout camp was not forthcoming, so the land languished. With the economic downturn, the original investors were ready to sell. The beauty and location of the site captured our imagination, and we soon became land owners in Idyllwild. Early on, we started interviewing several builders, but we did not move ahead immediately. The year was 2008.

One of our sons had some time on his hands after he became LEED (Leadership in Energy and Environmental Design) certified. He was eager to break ground. But first, he explored green home construction, solar energy options, optimal heating techniques, in house air circulation, gray water conservation, etc. and before long, we were traveling to Washington State to look at cedar homes. The International House of Cedar had sound ‘green’ practices, and it was from them that we bought a precut kit for a unique design of our choosing. Precut, notched, eight inch cedar logs, cut with flat surfaces, would create the entire perimeter of our two story home with very little waste of lumber. The house was to take eight weeks or so to construct from the ‘kit’. All the pieces were delivered from Washington on a flat bed truck. We opted, however, to hire a local builder with the Seattle group being advisors for a handful of days and with consultations as needed. Now it was time to find the right crew from Idyllwild and push forward. The year was 2010.

The favored builder from our earlier, initial group of interviewees seemed perfect for the job. He was young but had experience, including a few ‘green’ construction projects. But he had left the area and was involved with different pursuits. Given the tough economic times, there had been a long lull in new building projects on the Hill (Idyllwild) given the economic downturn. However, he recommended that we interview Rob Gray. That was our lucky day. With a recommendation from a builder we had previously liked and trusted, with the knowledge that others ‘in the know’ from Idyllwild had volunteered their insights, saying that Rob Gray was a reliable, honest person who did very solid work, after having finally met with Rob, and trusting our usually infallible sixth sense, there was no question that we had found our builder. We signed a contract. Rob had inspired confidence. He was honest about his experience and was open to new ideas; he was forthright in saying that he knew very little about ‘Green’ construction, but he also said he was eager to learn and take on the challenge. Project No. 1, the ‘main house’ was launched.

It became clear that this ‘eight week’ construction schedule, as touted by the Washington state group, was far more complex than anyone had anticipated. The precut kit was more like Lincoln logs on steroids. The complexities of the kit were one thing, but the California building codes in earthquake country were far different than any of the building codes in Washington. That is when the insights into Rob Gray, the Builder, were revealed. Here was a builder who was meticulous in his craft. Here was a builder who drilled into every stacked wall of cedar logs placing rebar reinforcements to ensure that earthquake codes were met and safety was provided to our family within those walls. And there was a lot of super strong glue in the notched logs for added good measure! Here was a builder whose homes passed the LEED ‘positive pressure’ retention requirement with ease, because he had created an air tight building. How fortunate we were to find in Rob Gray someone who is super focused on excellence. Here was a builder who recognized unintended design glitches and offered creative solutions; additionally, he was most helpful in recognizing aesthetic issues and in sharing his very constructive points of view. He embraced the rules and regulations governing the construction of a LEED home (the ‘rule book’ would cause many to run the other way), and he has always been exceedingly responsive to our homeowners ‘emergencies’,  even long after the completion of his on site building responsibilities. Consistently personable and helpful, it was a pleasure to discuss all the issues and frequent rethinking of ‘the plan’ for each of the homes. Rob clearly has the patience of Job!

With the success of House No. 1, we moved on to House No. 2, the ‘boys’ cabin. Always responsive to our family, he incorporated their tastes and aesthetic sensibilities. His work crew and subs were all consistently very pleasant and excellent workers, reflecting Rob’s work ethic and very high standards for his craft. He arranged to have our cut trees milled so that the wood was used in the home. The door and window frames and the fireplace mantles, for example, were wonderfully constructed, reflecting thought and care to the decorative nature of the milled lumber.  Rob definitely has a good eye.

Then on to House No. 3, my daughter’s cabin, which included an art studio. Again, he patiently listened and incorporated many ideas which were undoubtedly new, or at least different, while making all the desires of my daughter congruent with construction principles. The cabin is nothing less than a spectacular success.

And last but not least is a wood storage site (snake proof thanks to Rob) and a green house which gives the impression that Buckminster Fuller came by with his thoughts of a geodesic dome. Fun for us to contemplate the vegetables we would grow as it took shape, but not nearly as easy for Rob and his crew to construct. The three day timeline, as suggested by the construction manual from yet another kit construction, became several weeks, but the outcome is superlative.

In summary, all of us are left with a deep sense of gratitude. We hope that our ‘family compound’, with its LEED gold and silver certified homes will provide years of joyful times under the pines for many generations of our family. The construction was in the hands of a master builder with tremendous integrity and a person who truly lives his values. Rob is a true craftsman, a rare find these days, who takes pride in doing the job right. The entire project has been a pleasure, lacking all the contention that one might expect with such an undertaking; in good humor, all of the family members are trying to invent new projects for our property to keep Rob near! To know Rob Gray and to know his work and his crew, being ‘on the fence’ would not be an option for a prospective client. If professional excellence in all categories is sought for one’s building project, we recommend Rob Gray unconditionally.

Pam and Andy Horowitz and Family 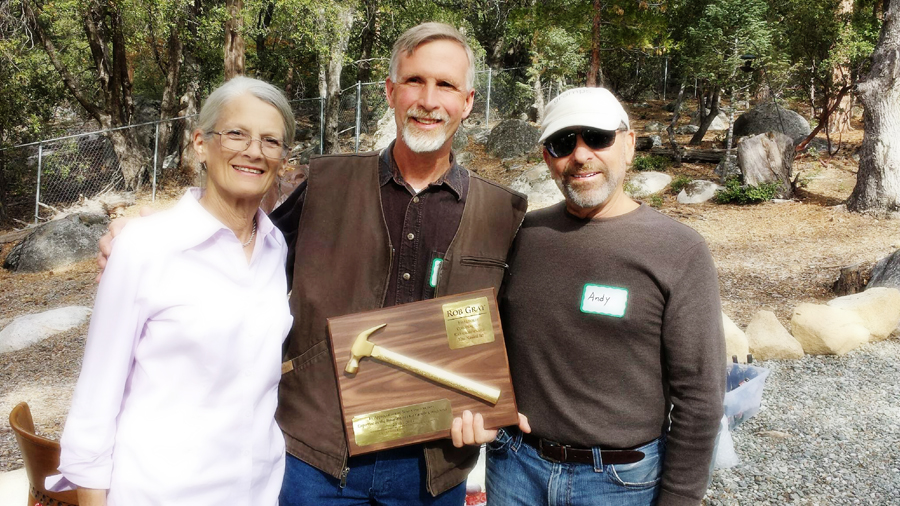